It ain't been pretty, but this thing's going up presently. The main difference between this and previous builds is the addition of a player character. Otherwise, it's been bug-slaying and interface tweaks. If your sign-in screen matches this image, you're up-to-date as of this writing. 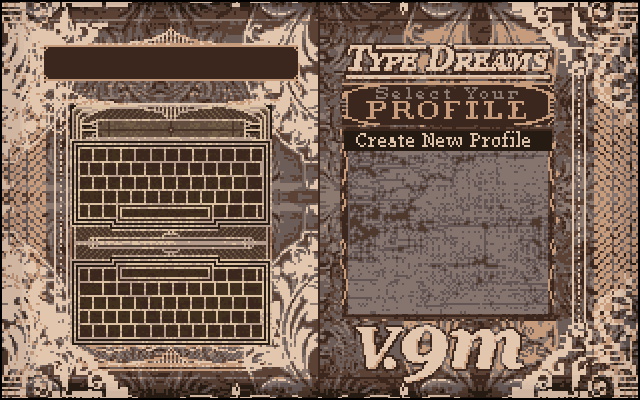 • Added a "city map" to the competition screen, so players can choose the level of skill at which they'd like to compete. Would you like a gentle affair, wherein humble hunt-and-peckists are welcome to compare abilities, or would you like your ass kicked by the fastest typists ever? If you can win in Toronto, I want to see a screenshot!

• Integrated the Player-Character stuff which wasn't ready on release day. There are 21 appearances from which to choose. If there ain't one here that suits you, please send me a note, would you?

• Core math revision: after encountering some rounding errors, I've upped the timescale resolution to characters-per-milisecond (from characters-per-centisecond) for more accurate calculation of both players' and npcs' words-per-minute.

• 13 New books! They'll come up in competition or unlock as you explore the game.

• Added a wax-cylinder victrola thing to the options menu, so players can flip thru the soundtrack.

• 6 New Songs for the soundtrack. 4 have lyrics and are included as typing exercises. (This is most of the diff in filesize.)

• Shift+Space (or Shift+Tab) will navigate most menus in reverse.

• Added a smoke effect for typewriters which have ceased burning.

• Finished the side-panel art for all the library's genres.

• Added little "NEW" badges for each book the player hasn't yet typed (thanks for suggesting this idea, Lucas!).

• Fixed a rotten slew of typos and glitches in the Socrates monologues (and elsewhere).

• Books won't unlock after typing them in races, now; only their scripted unlock events will do that.

• Fixed ambient sound and music issues in the options menu.

• Fixed a state in the competition map which prevented escaping to the main menu.

Okay. Plus lots of little things which don't merit transcribing. I've got a spot to würk on this, so I plan to update this again soon.
Thanks, everybody!
-Richard

"To save time is to lengthen life."

I'm almost not even a millenial. How do I Fullscreen it?

Don't worry, it's quool, the engine on which type dreams is built was made to run 80's-era "adventure games" that didn't require electricity and people played by candlelight. Nah, seriously, there should be a help file / FAQ included w the game. Sorry for leaving this unclear!

ANYWAY: in the same folder as typewriters.exe, there's a configuration utility called winsetup.exe.

Some users have display issues w either fullscreen or windowed modes. The default resolution is 640x400, but changing the "Graphics filter" setting can scale it either up or down. If it doesn't display at all, try switching "Graphics driver".

I hope this helps out! And thank you for playing Type Dreams.

Thanks!! I found out by myself (that's how clever I am). Very addictive game, thanks a lot!

Many thanks for this fix, good to see you back!